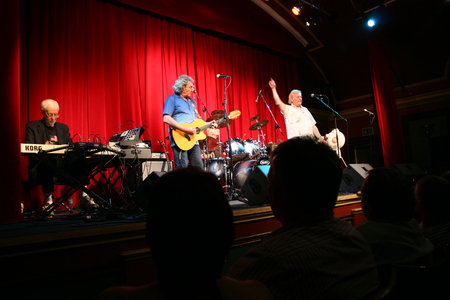 Mike and I had already been to one Strawbs concert that week, at the Half moon in Putney, where the sound was disappointing although the band gave their all as ever. We had reluctantly decided not to make the two hour drive to Hailsham on the Saturday, but after an email early on Sat morning from Calli Bradley offering us un-needed tickets in the second row, we rapidly changed our minds !! We didn't exactly need our arms twisting !

The great and good from the Witchwood had once again turned out in force to support the band on their final night of the English tour, the sound was excellent and the gig was a sellout.

Not certain what the definition of a village is or that of a town, so can't say for sure quite where Hailsham fits on the spectrum between hamlet and city, but if it's a town it is not a large one. Not large enough you would have thought to run a theatre of any note. Considering that the nearest place of any size is Eastbourne, famed for being the human equivalent to the elephant's graveyard, there didn't seem much chance that many people would turn up to a rock concert. How very wrong I was.

Not only was the theatre sold out, but the audience was one of the most appreciative I've seen. Not only that, but this was just one of the rock events being staged in Hailsham that night! I now know where I want to retire to!

First hint that this was different to your run of the mill concerts was that the queue outside the theatre was being filmed. Once inside, an announcement was made over the tannoy that the concert itself was being filmed, with the hope that it would be made into a DVD for release next year. Apparently the DVD will be part documentary about the recording of the Broken Hearted Bride.

Presumably as a result of the filming, the stage was extremely well lit, which was fantastic for any photographers, but did look very hot for the performers.

The theatre does not have a bar, only a little cafe, so it has a symbiotic relationship with the pub over the road. At half time everyone pours out of the theatre and crosses over for a drink. Whilst there we discovered that the tribute band Deeply Purple were playing in the function room at the back of the pub from nine till midnight! That too was heaving. Hailsham was hosting two major rock shows in one night.

On return for the second half they'd put a fan on ths stage as the lights were giving out so much heat. Dave Lambert stood in front of it, and his hair blew in the breeze. Dave Cousins joked that the Strawbs had their own personal supermodel..

As to the concert itself...
I had thought that the Southampton performance could not have been improved upon. I was wrong. The boys put in the performance of their lives. A truly stunning show. So pleased that it was recorded. All I can say is that America is in for a real treat.
Pete

See my gallery section for pictures from both the Half Moon and the Hailsham Pavilion gigs.

The afore mentioned filming at Hailsham meant that I was unwilling to take flash photographs, hence I have included some pictures that are a little blurred and not up to my usual standard, but are a record of the event and the gathering in the pub afterwards.
Tweet