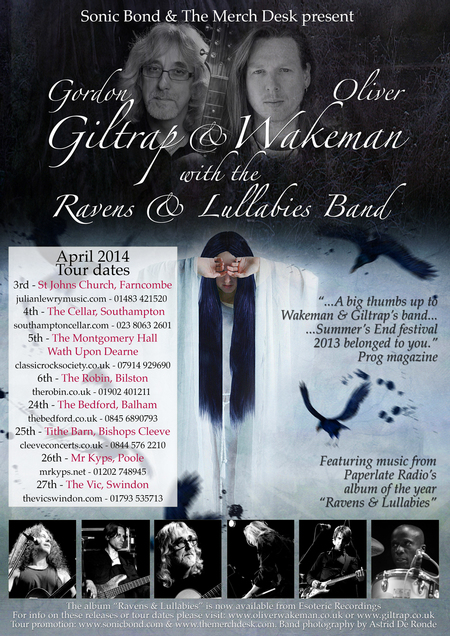 You can now order the 2CD Signed Limited Edition from Cherry Red Records for £11.99 + P&P

Track listing for Ravens and Lullabies

There will be two different releases of the album. A standard single CD with the following 13 tracks:

Live recordings taken from the 2012 tour:

Guitar Legend and the next generation of keyboard wizardry join forces for a new record!

The project was initiated with a phone call from Gordon to Oliver in early 2012 requesting Oliver's keyboard services for a new rock album. Within 24 hours Gordon had phoned again suggesting a full collaboration instead and the 'Ravens & Lullabies' concept was born.

Gordon and Oliver spent 2012 writing and recording the album which features a return for Gordon to his rock roots following a 30 year absence and Oliver's first recorded works since his departure from both Yes and Strawbs.

It has been recorded and mixed by 'Threshold' guitarist Karl Groom (who also mixed the Yes 'Live In Lyon' record which featured Oliver on keyboards).

The album will be available in two formats, a single CD featuring 13 new pieces and double pack special edition featuring a Bonus CD of live recordings taken from their 2012 tour and re-recordings of pieces from Oliver and Gordon's past catalogue.

Paul Manzi - vocals
Paul has performed with the Oliver Wakeman Band for the last 6 years (appearing on the live DVD 'Coming to Town') and is the current vocalist for the rock band Arena.

Johanne James - Drums
Johanne has been the Threshold drummer for the last 12 years.

The album also features a special vocal appearance by Benoit David, Oliver's old band mate from Yes, on the track 'From the Turn of a Card' written by Oliver during the Yes recording sessions of 2010.

Many of the pieces were debuted and refined during their acoustic duo tour in September and October 2012 where they performed sell out concerts across the UK. The tour will resume in March 2013 to coincide with the release of the new album.

Following ten solo albums in a variety of styles, Oliver Wakeman joined the legendary band 'YES' in 2008, touring with them up until mid-2011. A live CD and triple vinyl release, 'In The Present - Live from Lyon', was a fitting bookend to his period in the band. He also worked with the folk rock band 'The Strawbs' and appeared on their last studio album as well as their 40th Anniversary CD release. Appearing in venues across North and South America, Europe and the UK with YES, Strawbs and as a solo artist, he has become a well respected live performing musician to add to his other talents as composer, songwriter, lyricist and producer.

Oliver adds, "After working with YES, the chance of working with another legendary artist was an opportunity too good to miss. I am having a wonderfully productive time working with Gordon and feel we are creating something genuinely unique in our 'Ravens & Lullabies' project."

Many of Gordon's fans have been asking for years when he is going to return to his rock roots and others wondered what Oliver would write after the Yes experiences...